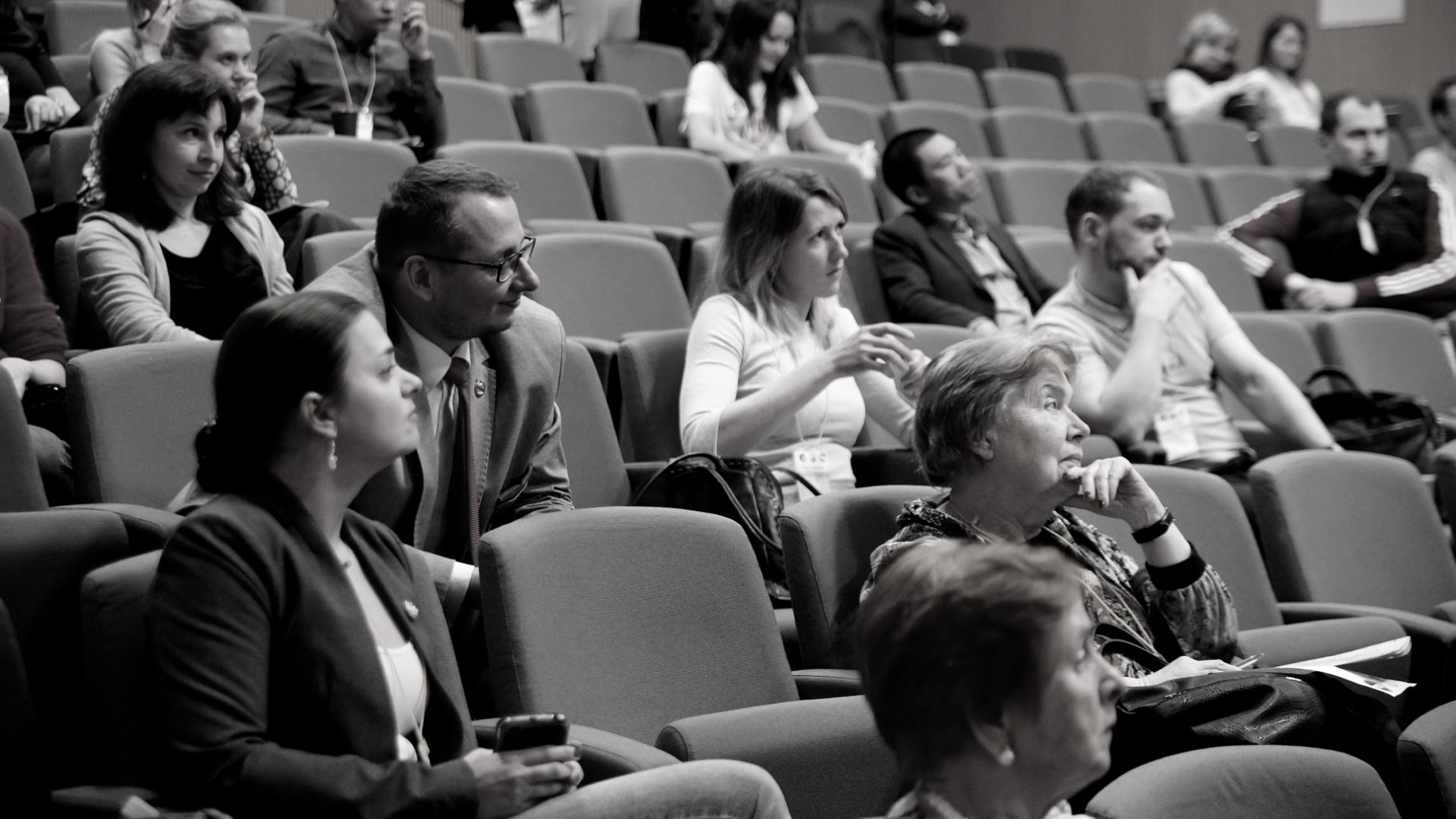 “The workshops (handling tough audience and table topics one) were absolutely marvelous! Learnt SO many useful things and the speakers were just fantastic.”

“Very open environment, high level of contestants and their speeches/evaluations, workshops were truly useful and inspirational.”

“The conference allowed me to dive deeper into the philosophy and structure of Toastmasters.”

This is what some of our guests had to say about the conference. Want to leave your own feedback? You are most welcome to do so at http://toastmasters.ru/spring-conference-2016/feedback/!

What a weekend! 80+ participants including 4 foreign guests and 6 representatives from the Saint-Petersburg Toastmasters clubs, 5 workshops, and 5 contests in 2 languages (English and German) with the great talented speakers in each of them! The 7th International Toastmasters Conference on April 16-17, 2016 in Moscow has passed with flying colors! See the full program here.

On Friday night a group of Moscow Area Toastmasters organized a pre-party for the foreign guests to thank them for coming and make them feel welcome, as for some of them it was the first time in Moscow and Russia ever!

On Saturday morning, following the welcome note from the conference chair  – Yana Litvinova, Andrey Kosilov kicked off the conference with his keynote speech highlighting the deep diversity, talent, and energy of the Moscow Toastmasters community. He thanked everyone of having created a friendly and supportive atmosphere where every person could grow and develop their public speaking and leadership skills.

Then it was a time for the first contest of the day – Moscow Area Evaluation. The contest was chaired by Kristina Sharykina, with Igor Kokarev as a Chief Judge. No evaluation was possible without a target speaker. Thus, this time we were proud to have Ivetta Gerasimchuk from Verbissimo club, Geneva, delivering her entertaining speech to the audience, which would then be thoroughly evaluated by 6 experienced Moscow Toastmasters: Sergey Saprykin, Nastya Kolodina, Denis Shevchuk, Yana Litvinova, Olga Kovtyukh, Margarita Ryndina.

While all have shown the highest level of critical thinking, the strongest 3 evaluations have been selected by a team of secret judges, and the following winners of the Moscow Area Evaluation contest have been announced:

In parallel with the Moscow Area Evaluation contest in English there was a German Evaluation Contest taking place. Larisa Zorina was the Contest Chair, and Olga Shiryaeva has served as the Chief Judge. Both the members of the local club Redefluss Moskau and foreign guests took part in the contest.

It has been a tough competition, as the Moscow Toastmasters had to compete with the native German speakers. However, the Moscow Area representatives didn’t let us down and have shown the best class critical thinking, making it to the list of winners of the  German Evaluation Contest:

Following the Moscow Area Evaluation and the German Evaluation contests there was the first workshop of the day. Sergey Kuzin, a professional business coach, public speaker, and a member of the Moscow Toastbusters club, has urged everyone in the audience to embrace the “tough questions” as if they were a present given to us, and created a huge positive vibe in the room by engaging 80+ attendees in the one biiiig looooong loooovely hug!😋

Next it was a time for the Moscow Area International Speech contest in English that was meant to give an opportunity to both the foreign guests, Toastmasters from St. Petersburg clubs, and the members of the Moscow Area Toastmasters clubs, who didn’t make it to the Area Finals for one reason or another, to try themselves on a big stage and show the best of their abilities! Thanks to the effort of Ilya Nefedov, the contest chair, and Valeria Kholodkova having served as the Chief Judge, the contest went nice and smoothly. 8 talented speakers created a hurricane of emotions and kept the audience all in our ears throughout! Hooray to all the participants of the International Speech contest: Tasya Filippova, Kristina Sharykina, Sergey Kuzin, Yulia Tokareva, Julia Sharova, Kirill Alemaskin, Klaus Roth, Denis Shevchuk!

All 8 speakers deserved an award. Nevertheless, the team of secret judges had to choose only the 3 of them who really stood out in the crowd. The ballots were filled out, points were calculated, and the 3 winners of the International Speech contest have been announced:

In the meantime, our German-speaking peers were not falling behind, and held their own International speech contest. Interesting speeches, burning energy, and the positive vibe in the room were the common adjectives one would use to describe this contest. Similar to the German Evaluation Contest our local Moscow Toastmasters had to face the native speakers in an attempt to win the contest. The contestants were bright and talented: Sergey Schepilov, Anna Ponomareva, Klaus Roth, Olla Shimbireva, Gudrun Wahnschaffe, Alexandra Sholtinskaya.

And this time around the fortune turned out to be on the side of the Moscow Toastmasters, as the winners were announced:

While the Chief Judges – Valeria Kholodkova and Larisa Zorina and their teams were doing their math determining the winners of the aforementioned contests, we had another workshop led by our honorable guest – Klaus Roth from Bonn International Toastmasters. His workshop was aimed at helping everyone in the audience to learn to find inspiration in our day to day lives and has encouraged everyone to take part in the the Table Topics whenever possible! And it wasn’t a blind statement, as Klaus has shown us by his own example what it’s like to be the Chef of Table Topics! Thanks a lot, Klaus!

With the the official part of the 1st Day of the conference was over, but it was too early to call it a day, wasn’t it?! Thus, 50+ participants headed down to the Afterparty at one of the local taverns with a burst of positive emotions  to celebrate the winners of the 4 contests that took part on the 1st day of the Conference! Yaaaaahoooooo! You obviously understand that whatever happened at the afterparty would stay there forever. However, here’re some pics just to give you some hint on what it was like…

The very next morning there we were right into the 2nd day of the Conference! Before the major contest of the day those lucky survivors of the AFTER-PARTY and the AFTER-AFTER-PARTY indulged in a LEGO world brought to us by our very own Maxim Luchinin within his workshop “Legoman or the Barriers of Communication”!

The goal of the workshop was to highlight that while there had been a lot written and said about the benefits of the teamwork, and even though many people nowadays understand the advantages of such collaboration, no team can survive and accomplish its tasks without appropriate communication within. While the rules of engagement required everyone to work and collaborate as a team on a common task in a complete silence, the audience could not help smiling at each other as they went through the construction of the Highest Tower while making sure their individual goals (proactively given to each person) were met! And everyone (well…to the different extents but still) have nailed it!

Full of positive emotions with lots of energy in the room we had moved on to the main event of the day and the whole Conference – the Moscow Area Speech Contest Finals! Dmitry Trapeznikov, the chair of the contest, has thoroughly explained the rules of engagement to the contest participants and the audience, and confirmed that Pavel Kaptel – the Chief Judge – had briefed his team of judges to ensure the fair play in accordance to the Toastmasters contest rules. The best of the best speakers of the four Moscow Toastmasters clubs came face to face to cross their speaking swords and decide who deserved the title of the best speaker of the Toastmasters year 2015-2016! Despite the final results, it is important to highlight that all the contestants have performed at their best and deserve an honorable mention and great thanks for their persistence and high dedication to personal growth and development!

A round of applause to:

The competition was fierce and the stakes were high!!! The speech topics ranged from humorous to scientific to highly emotional and motivational. Some speakers went as far as to share their personal stories and as the results have shown, that has paid off handsomely. With no more pulling the cat’s tail Moscow Area is thrilled to congratulate the winners of the Speech Contest Finals – these individuals represent the Russian Toastmasters community at its best, hands down!

Last but not least by all means, the Moscow Area extends the deepest gratitude to the Conference Chair – Yana Litvinova – and her organizing team who made the conference the true success: Valeria Kholodkova, Sergey Saprykin, Alla Arlan, Max Silin, Kristina Sharykina, Ivan Terikov, Dmitry Trapeznikov, Maxim Luchinin !!!  It wouldn’t be possible without your hard work and dedication! THANK YOU ALL!!!

Of course, there is always room for improvement, and we are grateful to all of you for your feedback, which will allow us to make even better conferences in future. Some of the common themes we heard from you so far are:

“It would be nicer to stricter follow the timing of the sections and breaks”.

“Try to get as many foreigners as possible “.

If you haven’t done so yet, please tell us your impressions and specific suggestions at http://toastmasters.ru/spring-conference-2016/feedback/.

All in all, we believe the 7th International Toastmasters Conference on April 16-17, 2016 in Moscow turned out to be a great success! Moscow Area thanks all the participants and organizers, and looking forward to welcoming all of you and many more new faces at the 8th International Toastmasters Conference in Moscow in the year 2017. Stay tuned for future announcements!